You Might Have To Change The Way You Sit

By MICHAELENNE DOUCLEFF as heard on Morning Edition

My back hurts when I sit down.

It's been going on for 10 years. It really doesn't matter where I am — at work, at a restaurant, even on our couch at home. My lower back screams, "Stop sitting!"

To try to reduce the pain, I bought a kneeling chair at work. Then I got a standing desk. Then I went back to a regular chair because standing became painful.

I've seen physical therapists, orthopedic surgeons and pain specialists. I've mastered Pilates, increased flexibility and strengthened muscles. At one point, my abs were so strong my husband nicknamed them "the plate."

All these treatments helped a bit, at first. But the pain never really went away. So a few years ago, I decided to accept reality: Sitting down is — and will always be — painful for me.

I was interviewing Sherer for a story about bending. But she could tell I was in pain. So I told her my story.

Her response left me speechless: "Sitting is a place where you can find heaven in your joints and in your back," she says. "It's not sitting that's causing the pain, it's howyou're sitting.

Do hunter-gatherers sit less than we do?

Recently there's been a lot of talk about how much Americans sit.

Anthropologist David Raichlen at the University of Arizona says that is not accurate.

"No. Not from our data," says Raichlen.

Raichlen studies modern hunter-gatherers called Hadza, in Tanzania. They live primarily off wild foods, such as tubers, honey and barbecued porcupines. And to acquire this food, there's no doubt they are active.

"They do a lot of upper body work," Raichlen says. "And they spend quite a bit of time walking — at a pretty high rate of speed."

On average, Hadza adults spend about 75 minutes each day exercising, Raichlen says. That amount is way more than most Americans exercise. Many of us can't muster a measly 2.5 hours each week, as recommended by the Centers for Disease Control and Prevention. So there's no doubt the Hadza are in better cardiovascular health than most Americans.

But do the Hadza actually sit less than we do?

A few years ago, Raichlen and colleagues decided to find out. They strapped heart-rate monitors onto nearly 50 Hadza adults for eight weeks and measured how often each day, they were just, well ... sitting around. The results shocked Raichlen.

"The Hadza are in resting postures about as much as we Americans are," he says. "It's about 10 hours a day."

By comparison, Americans sit about nine to 13 hours each day, on average, a study reported in 2016.

But here's the thing: The Hadza don't seem to have the back issues that we Americans have, even as they age.

"Not that we have found," Raichlen says. "There hasn't been a ton of studies looking into muscle and joint pain in the Hadza groups, but people are highly active across the life span. There are some declines in activity with age but nowhere near what you get in the U.S."

Not how much, but how we sit

So maybe Sherer is right. Maybe the problem, when it comes to back pain, isn't how much Americans are sitting, but the way we're sitting.

"Yes, I think that's probably a big part of the story," Raichlen says.

"Most of us do not sit well, and we've certainly been putting a lot more stress on our spines," says Khan, who operates on spines at Sutters Health's Palo Alto Medical Foundation.

If we change the way we sit, Khan says, it will help to decrease back problems.

Over the past century or so, many Americans have lost the art of sitting, he says. Most people in the U.S. — even children — are sitting in one particular way that's stressing their backs. You might not realize you're doing it. But it's super easy to see in other people.

Here's how: Take a look at people who are sitting down – not face-on but rather from the side, in profile, so you can see the shape of their spine.

"Most people tend to round out their backs when they sit," Khan says. "Their spine is in an improper position, and they will tend to have more back problems."

Back problems crop up because sitting like a C — or a cashew nut — can damage the little shock absorbers in the spine, called the intervertebral disks.

"You can think of a disk as a jelly doughnut," Khan says. "Sitting like a C puts a lot more pressure on the front of the doughnut than on the back."

And what happens when you press down on one side of a jelly doughnut but not the other side? Jelly can squirt out.

Your spinal disks aren't much different. Sitting in a C-shape, over time, can cause disk degeneration. Or one side of a disk can start to bulge. "The disk can then push against nerves, or it can rupture," says biomechanist William Marras, who directs the Spine Research Institute at Ohio State University.

"When the disks get messed up, you've got real problems," Marras says. "So everything we do in biomechanics is to try to protect the disks."

Straightening out the C

At Sherer's studio, she pulls a up a photo of gray-haired man sitting at a loom. He must be at least in his 60s.

"This is taken in Rajasthan, India," Sherer says. "The man sits at the loom weaving, for hours and hours every day, just like we do at a computer," she says. "And yet his spine is still elongated." 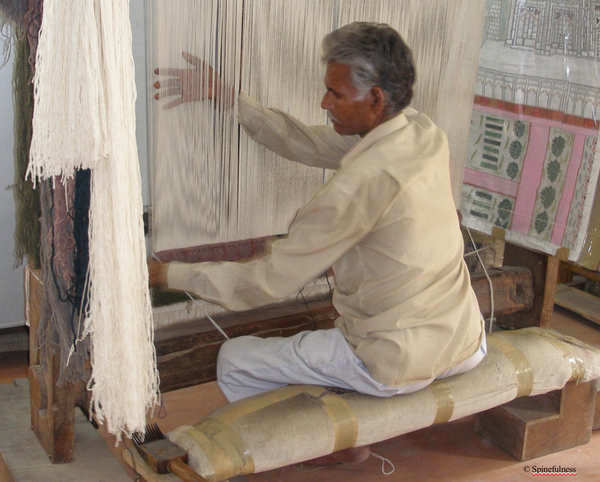 No special chair required: A man in Rajasthan, India, sits at his loom, weaving for hours each day with exemplary posture. He untucks his pelvis and elongates his spine. Jean Couch

Elongated is an understatement. This man's spine is straight as an exclamation point. His shoulders are rolled back. His muscles looked relaxed and flexible.

I've seen similar sitting postures in other rural pockets around the world — for example, in eastern Liberia during the Ebola outbreak and in the Yucatán countryside. (Basically anywhere people still do a lot of hip-hinging when they bend over. Because what do you do when you sit down? First you bend over.)

In fact, you don't have to go back very far in history to find the same posture here in the U.S. Photos and drawings from the early 20th century show that many Americans sat with straight backs and shoulders rolled back, similar to the man at the loom. Today, you can find a similar posture with babies and young children.

One of the problems, Sherer says, is our culture focuses on trying to fix the upper body. "Sit up straight," parents and teachers say, and most of us immediately stick our chests out.

But that's the last thing you want to do, Sherer says.

"Even just hearing the word 'spine' makes people lift their chest because they want to have 'proper posture,' " she adds. "But when I see it, I'm like, 'No! That's what causes back pain. Lifting your chest is going to make your back pain worse.' "

Or to put another way — your butt.

"The most important thing to change to reduce back pain is your pelvis position," she says. "It's like a stack of toy blocks. If the blocks at the bottom aren't sturdy, then the top has no chance."

Pull your tail out so it can wag

Sitting in Sherer's studio, I glance over at my profile in the mirror. And right away, I see the cashew shape. It doesn't look pretty. My shoulders are rolled over my chest, and my pelvis is tucked under my spine.

To figure out how to shift your pelvis into a healthier position, Sherer says to imagine for a minute you have a tail. If we were designed like dogs, the tail would be right at the base of your spine.

"When you sit with a C shape in your spine, you're sitting on this tail," Sherer says. "It's kind of like a dog with its tail between its legs, who is scared and frightened."

To straighten out the C shape, Sherer says, "we need to position the pelvis in a way that this tail could wag."

In other words, we need to untuck our tails. To do that, Sherer says, you need to bend over properly when you go to sit down.

"Yes!" Sherer exclaims. "Every time you sit down, you bend somewhere."

And where you bend determines how you will sit.

If you bend at the waist, which many Americans do, then you will likely sit with a C or cashew shape.

If you bend at the hips (as we learned about in a previous story), you're more likely to sit correctly with your tail untucked.

"Bending at the hips can be hard for many people to figure out," Sherer says. "It's a bit counterintuitive."

But she has a trick to help people learn.

"Stand up and spread your heels about 12 inches apart," she says. Now, put your hand on your pubic bone — like a fig leaf covering up Adam in the Bible, she explains.

"When you bend over, you want to let this fig leaf — your pubic bone — move through your legs," she says. "This creates a crease between your pelvis and legs."

"If you untuck your pelvis while you sit, your quadriceps muscles can relax, and then your hamstrings can stretch," Sherer says.

I could definitely feel my quads relax. The muscles felt like butter set on a warm pan: They softened and seemed to melt.

Man, this felt good. "Oh wow!" I exclaimed, as a chill went up my body.

If you don't feel your hamstrings stretch — and your quads don't relax — you're probably not doing the action correctly, Sherer says.

"Then you're probably using your lower back muscles to push your butt out," she says. "That can cause more back pain. You don't want to do that."

How am I sitting now?

After leaving Sherer's studio, I realized that I had been sitting with my tail — or pelvis— tucked for decades. And it wasn't easy to fix. I had to return to Sherer's studio for many appointments and work hard, every day, to learn how to untuck my pelvis while sitting at my desk.

But little by little, the muscles around my hips started to loosen up. The pain began to dissipate, very slowly.

After mastering the new sitting position, I decided to visit Khan to get his opinion. "Do you want to look at my pelvis and see what you think about how I'm sitting?" I asked the spine surgeon.

Khan took his hand and placed it on the base of my spine, right at the top of my pelvis.

"You're sitting perfectly," he said nonchalantly. "Because you're basically sticking your butt back and creating this little curve at the lower part of your spine."

"If you sit like this, you're going to put a lot less stress on your spine and have less back issues," Khan added.

And as an added bonus, I feel like I'm following the spinal pose of Jennifer Lopez: curvy on the bottom and straight on top.