25 Again? How Exercise May Fight Aging 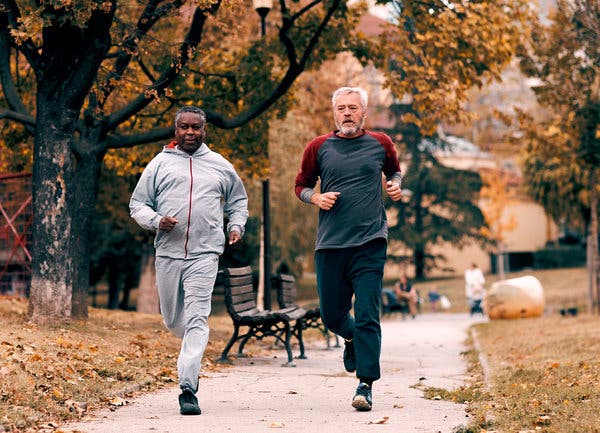 The muscles of those who worked out looked like those of 25-year-olds and showed less of the inflammation that is tied to health problems as we age.

Regular exercise throughout adulthood may protect our muscles against age-related loss and damage later, according to an interesting new study of lifelong athletes and their thighs. The study finds that active older men’s muscles resemble, at a cellular level, those of 25-year-olds and weather inflammatory damage much better than the muscles of sedentary older people.

The study also raises some cautionary questions about whether waiting until middle age or later to start exercising might prove to be challenging for the lifelong health of our muscles.

Physical aging is a complicated and enigmatic process, as any of us who are living and experiencing it know. Precipitated by little-understood changes in the workings of our cells and physiological systems, it proceeds in stuttering fits and starts, affecting some people and body parts earlier or more noticeably than others.

Muscles are among the body parts most vulnerable to time. Almost all of us begin losing some muscle mass and strength by early middle age, with the process accelerating as the decades pass. While the full causes for this decline remain unknown, most aging researchers agree that a subtle, age-related rise in inflammation throughout our bodies plays a role.

“A lot of studies show that higher circulating inflammatory factors in people are associated with greater loss of muscle mass,” says Todd Trappe, a professor of exercise science at Ball State University in Muncie, Ind., who oversaw the new study with his brother Scott Trappe and other researchers.

Dr. Trappe and his collaborators, who long have been studying the physiology of older athletes, also knew that physically fit people tend to have lower levels of inflammation in their bodies than inactive people. So, the researchers wondered, would active, older people also have more and healthier muscle mass than other older people? And if so, what might that tell us about how human muscles can optimally age?

To find out, the Ball State scientists turned to a unique group of volunteers. Local men and women in their 70s or 80s who had been training continuously since the running boom of the 1970s, these volunteers already were part of several interrelated studies at Ball State.

Now, the researchers wanted to look deep inside the older athletes’ blood and muscles. So, they gathered 21 of the elderly athletic men (results from a separate study of women will be published soon, Dr. Trappe says), along with 10 runners and cyclists in their 20s, and another 10 healthy but sedentary elderly men. They measured all of the men’s thighs, as a marker of muscle mass, and took blood and muscle-tissue samples.

They noted immediately that the men’s thigh circumference reflected their ages and lifestyles, with the young athletes sporting the burliest legs, the elderly athletes slightly smaller ones, and the inactive elderly men the spindliest.

The researchers next had the men complete a single session of brief, but strenuous, lower-body weight training, using a knee-extension machine. Since none of the men lifted weights, this exercise was expected to stress their muscles in an unfamiliar way. A few hours later, the researchers again drew blood and biopsied the men’s muscles.

Then they checked the tissues for a broad slate of inflammatory cells and gene markers. Bogglingly complex, inflammation involves multiple genes and cells that talk to other genes and cells and dynamically ramp up, or tamp down, the process. Immediately after any bodily injury or strain, which includes strenuous exercise, inflammation helps tissues to heal and strengthen. But if inflammation lingers, it can become harmful and, in muscles, block them from growing larger and stronger after exercise.

The researchers found that inflammatory responses differed in the men. The young athletes displayed the least amount of inflammation in their blood and muscles at the start of the study and continued to do so after the workout. While their muscles flared briefly after exercise with inflammatory cells and related gene activity, the microscopic examination found that countervailing anti-inflammatory signals were also increasing and should soon cool the inflammation.

A similar response occurred inside the muscles of the elderly athletes, although their inflammatory markers were slightly higher and their anti-inflammatory reactions a bit lower.

But in the untrained elderly men, inflammation was much more of a bushfire, spiking higher than among the other men and showing fewer cellular signs of resolving any time soon.

Taken as a whole, these results suggest that long-term exercise may help aging muscles remain healthy in part by readying them to dissipate inflammation, Dr. Trappe says. But on the flip side, sedentary living seems to set up muscles to overreact to strain and remain inflamed, potentially leading to fewer muscular gains when someone does exercise.

This study was small, though, and examined the men’s muscles only once, soon after exercise. It did not look into whether and how their muscles actually changed over time with training.

More important, the findings should not discourage middle-aged or older people who have been inactive from starting to visit the gym, Dr. Trappe says. “Even if inflammation gets in the way a bit at first, your muscles will respond and grow,” he says, and eventually should start to resemble those of people who have been exercising lifelong.