As little as 20 seconds of brisk stair climbing, done several times a day, might be enough to increase aerobic fitness. 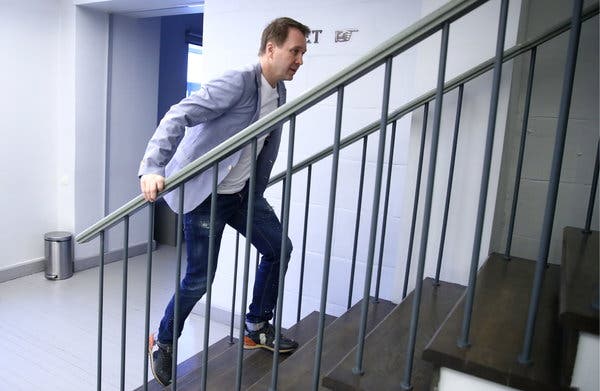 As little as 20 seconds of brisk stair climbing, done several times a day, might be enough exercise to improve fitness, according to a pragmatic new study of interval-style training.

The study finds that people can complete a meaningful series of insta-workouts without leaving their office building or even changing out of their dress shoes, offering hope — and eliminating excuses — for those of us convinced that we have inadequate time, expertise, income or footwear to exercise.

By this point in January, many of us have begun to waver on our New Year’s fitness resolutions, often blaming jammed schedules for our neglected workouts.

Such perceived time constraints have fueled interest in exercise that is short but strenuous, substituting intensity for duration. These types of workouts, structured as interval sessions, consist of brief spurts of high-intensity exercise, such as 20 seconds of all-out pedaling on a stationary bicycle, interspersed with periods of rest.

I have written about the science behind high-intensity interval training, or H.I.I.T., which indicates that even a minute or so a day of hard effort can increase endurance and improve many aspects of health, including blood pressure and blood-sugar control.

But typical high-intensity interval workouts, in practice, are lengthier and less convenient than many of us might hope. They typically require time to reach the gym or running path, change, warm up and shower, in addition to the formal exercise.

Recognizing these drawbacks, exercise scientists at McMaster University in Hamilton, Ontario, who have been noodling in their labs for years with different types and lengths of H.I.I.T. workouts, began to consider how best to simplify and shorten intense training so that it could be doable for most people but still effective.

Stair climbing emerged as one option. Clambering up a stairwell demands physical effort but little planning, travel or cost, since most office buildings contain stairs.

In 2017, the scientists published their first relevant study. It showed that sedentary women who completed three, 20-second bouts of climbing stairs, performed in one session with several minutes of rest between the climbing, increased their fitness by about 12 percent after six weeks.

But that workout still required about 10 minutes or so of uninterrupted time, which, though truncated, might be difficult for some people to tuck into a workday.

So, for the new study, which was published this month in Applied Physiology, Nutrition, and Metabolism, the researchers decided to see whether it was feasible to break the workout into a series of “exercise snacks” spread throughout the day.

Their hope was that a single quick burst of stair climbing would be strenuous enough to prompt improvements in fitness if it were repeated multiple times, even with hours in between.

To find out, they recruited 24 healthy but inactive college students, tested their endurance and leg power using a specialized stationary bicycle, and randomly assigned them either to continue with their normal lives as a control group or start exercise snacking.

The exercisers reported to the physiology building’s stairwell. There, the researchers directed them to warm up with a few jumping jacks, squats and lunges and then hurry up 60 steps — three flights of stairs — as quickly as they could, one step at a time, while using the guardrail for safety. These ascents lasted about 20 seconds.

And that was the workout. The volunteers repeated these abbreviated exercise snacks twice more that day, usually at lunch and again in the afternoon, for a total intense exercise time of about a minute.

By the end of six weeks, the exercisers had increased their aerobic fitness by about 5 percent. They also showed improvements in leg power and could generate more power while cycling.

These results suggest that intermittent, quickie stair climbing can be an effective workout, says Martin Gibala, a professor and chairman of kinesiology at McMaster University and the study’s senior author.

“We had wanted to make interval training as easy and convenient as possible while still providing enough physical stimulus” to actually improve fitness, he says.

Of course, this snacking approach to intervals did not elevate fitness as much as the single sessions of repeated stair climbing that he and his colleagues had examined earlier, he says.

It also is not clear from this experiment whether and how the widely spaced intervals might affect people’s blood pressure and other measures of health, including appetite and weight, and also whether older people or those who already are in shape would similarly benefit.

“This was a small, proof-of-concept study,” Dr. Gibala says. He and his colleagues plan to conduct larger, longer-term studies of the effects of differing amounts of and approaches to stair-climbing and other interval workouts.

“We are not suggesting that this type of exercise can or should” replace all other physical activity, he continues. “But it is one possible way for people who think they are too busy to work out to fit exercise into their lives.”