The Pros & Cons Of Barefoot Running 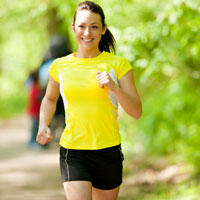 With the subculture of barefoot runners and the products catering to them growing daily, just about every chiropractor has been asked at one point or another about their opinion regarding barefoot running.

The feet are some of the body's most beautifully efficient mechanisms, so changing the way they're used every day shouldn't be done haphazardly.

Most of the hype put forward by barefoot-running advocates is anecdotal and based on questionable knowledge of biomechanics at best. They point out that humans ran and walked without shoes for millions of years, arguing that going barefoot is natural for humans and can reverse injuries caused by modern running techniques while preventing future problems. But "going Paleo" for the sake of going Paleo isn't a very strong argument on which to base any patient recommendation. This argument also fails to take into account the fact that asphalt and concrete didn't exist, as well as the fact that there were very few 50- or 60-year-olds still running around millions of years ago.

Nevertheless, there are compelling arguments for going shoeless or at least wearing the minimal amount of shoe possible. A 2010 study led by Harvard professor of human biology Daniel Lieberman, published in the journal Nature, suggests that runners who don't wear shoes have a significantly different foot strike that minimizes structural impact compared to those who wear shoes. Lieberman, et al., analyzed the running styles of adult U.S. athletes who had always worn shoes; adult U.S. runners who had grown up wearing shoes, but now run barefoot; Kenyan athletes who had never worn shoes; and Kenyan athletes who had grown up running barefoot, but had switched to running with shoes. They found that the barefoot runners tended to point their toes when landing, putting the impact at the middle or front of the foot instead of on the heel and making the runners less prone to repetitive-stress injuries.

Other research out of Harvard has demonstrated that the foot-strike pattern associated with barefoot runners is significantly more economical for running, meaning runners use less energy to run the same distances as runners wearing traditional shoes and striking with the heel.

On the other hand, a trial published earlier this year in the journal Medicine & Science in Sports & Exercise raises questions about whether barefoot running is really advantageous or simply contributes to the development of a different set of running injuries. Thirty-six recreational, experienced runners participated in the study. Each participant had, until the beginning of the trial, run between 15 and 30 miles a week wearing normal running shoes. Both groups received a pre-participation MRI of their feet to ensure no pre-existing injuries were present.

Half of the participants were used as a control and told to continue their running routine using the same mileage in the same shoes for the duration of the study. The other runners were given barefoot-style shoes and told to incorporate them into their runs according to the recommendations provided at the time by the manufacturer: a single short 1-2-mile run in the shoes the first week and two 1-2-mile runs in the shoes the second and third weeks. After the third week participants were encouraged to add miles as they felt comfortable. (The manufacturer has since changed its recommendations to include strengthening and proprioceptive exercises, and suggests barefoot-style running be introduced more gradually.)

Following 10 weeks of training, both groups received follow-up MRI studies. Neither group showed injuries or tissue changes to any of the structures in the lower leg, but over half of the participants wearing barefoot-style shoes had developed increased bone-marrow edema in the tarsals and metatarsal bones.

The radiologists rated the severity of the edema on a scale of 0 to 4, with 0 indicating no edema and 1 indicating the slight edema of a normal response to training. The control group showed average level 1 edema levels in the bones of their feet, while the majority of the barefoot-running group had developed edema levels of at least 2. Three of the barefoot runners had extensive level 3 edema and two displayed full stress fractures of their calcaneus or metatarsals with associated level 4 edema. By the end of the test period, almost all of the barefoot-style runners were running fewer miles due to pain and soreness.

Not everyone who chooses to make the switch to barefoot or minimal footwear will end up with injuries. However, anyone planning on doing so needs to be extremely cautious during the transition period. I tell patients who are dead set on ditching their shoes for barefoot running to transition slower than they think is necessary to allow their foot and calf muscles to adapt; to start on a cushioned track surface if possible; and to consider using a barefoot-style minimalist shoe at first. Distance running without shoes might have been natural for our human ancestors, but for most of us, it's something our bodies have never experienced.

In a press release detailing the Medicine & Science in Sports & Exercise study, one of the study co-authors stated, "People need to remember they've grown up their whole life wearing a certain type of running shoe and they need to give their muscles and bones time to make the change. If you want to wear minimalist shoes, make sure you transition slowly."

What's the clinical takeaway from these studies? When it comes to injury prevention and running efficiency, it's much more important how you run than what you run in. Heel strikers, regardless of shoe, will sustain more impact injuries than those who land on their mid or forefoot and allow their arches to act as natural shock-absorbers. The most efficient and least-injury-prone runners shorten their stride, land on the forefoot, and keep the running motion smooth, light and flowing.